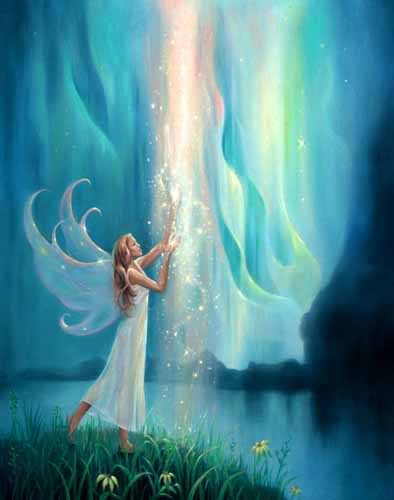 An answer to doom and gloom

The following is a Lightworker's recent worthy response to a doom and gloom message they received advising them to hoard food supplies because the New World order was imminent.

I note that you are advising people to stock up on survival things and that there will soon be an announcement of a New World Order. I was about to either commit Hari Kari or run down to the supermarket to stock up, but decided that perhaps it would not be necessary - for most empowered people on our planet are not creating this possibility. Nor do I give such things my power.

I see the world we are creating as wonderful, where nothing is too good to be true.

Fear is an illusion. It's only there as long as we allow it to be or go into agreement with it. Does being in fear of our government help create the world we want or help increase the idea of powerlessness?

I wonder how it would be if no-one ever spoke out against fear based ideas such as politicians having the power and right to do what they do because after all we elected them, and that courts have certain rules to follow and that cannot be changed. And that we must work within the system and just ask very nicely and hope that we are given at least some freedoms.

At a recent Conference I attended, two of the international speakers spent a great deal of time trying to convince people it was only days (two or three, as I recall) away from various disasters, take overs, financial crash etc. If I had been the MC, I would have painted an entirely different picture - one of confidence, love and laughter. I wonder what they said when their doomsday predictions were shown to be invalid. Perhaps they claimed that it was averted by them and others in the war. Yet an eternal truth is that what we resist, persists. The only way that such things are not created is that we create/choose another reality - one we prefer. It is a great benefit when people attending such events are encouraged to lose any negativity they may inadvertently have brought with them and return home with confidence and the certainty that we can choose anything we want. For nothing is too good to be true.

All scenarios are possible in our universe. The ones that become most real to us are the ones we put most attention on.

Did it not say in the Bible that we have Free Will? Doesn't that clearly mean we are free to choose as we wish? Did not Jesus say that we would do all he could and even greater miracles? Have we forgotten or ignored these things? And hasn't this truth been presented in all major religions down through the ages?

I believe our role is to only present the real truth, for here we find love  - and that is what we are now creating - a Golden Age. The increase of spirituality and consciousness on this planet is stunning. The breakdown of old systems are a sight to behold, as we replace them with truth, beauty and an understanding that we are all brothers. The time to love your neighbour is now.

Rather than empower the 'less than light' side of activities on this gorgeous planet, that are in fact only there to give us the opportunity to reflect on who we really are - let's all put attention on - and thus create - exactly what we want (not what we don't want?)

One vital point in that we are not working 'toward' something (e.g. freedom). All creation occurs in the now. For no other 'time' exists than this instant. Motivational and sales speakers have been getting this message across for eons. They say "Don't say you are going to have it. Decide you already have it."  You know the scene, pictures on the shaving mirror, go down to the Ferrari dealer and sit in your car,

Yes, I do understand your reasoning for the warnings. The same as I have understood the  hundreds of dire warnings from people in the freedom movement for decades. Nearly all meant well with the utmost sincerity.

On exactly the same principal on choosing to sipport the ideas of negative scenarios we do not want, is it not true that we could make a case to form a militia, get a gun and lots of ammo, sell our house as it will be next to worthless, get rid of our bank accounts and any cash we have; not use any tracking device such as a mobile phone, GPS, toll unit, smart card etc; to not eat anything that is not organic because we will definitely make ourselves sick, only go out in groups in case we are picked up; have full protection from ozone rays and chemtrails whenever we go out - and wear a mask as they do in Japan; don't make calls from home because of tapped phone lines. And so on and on forever. I mean forever. And all because people should be prepared for the worst. To me, preparing for the worst is to add energy to that idea. The worst will not happen unless we make it so. The only way to prepare for the worst is to create the best in the moment. What you suggest will not happen, but only because enough of us will not go into agreement with it and thus create it.

Perhaps we can use our great power to assist us to create a wonderful nation, where people are inspired to create peace, harmony and unlimited production and of course, become free men and women.